Surely by now, you’ve heard of Minecraft. If not, Microsoft is about to make sure you do. By acquiring its parent company Mojang for a whopping $2.5 billion, the tech giant is about to make the once indie game, (which according to the developer became an “accidental” success) more mainstream. The pricey acquisition has left many tech analysts shaking their heads, but Microsoft chief executive Satya Nadella says the company’s decision has less to do with profit and is more about trying to get kids involved with math and science.

Whether you believe that or not, there’s no denying the fact that kids love the game, and educators are increasingly embracing its capacity for promoting learning. Some have even said we’re raising a "Minecraft generation". Since my twelve year-old son has been obsessed with the game for some time now, I thought I’d pick his brain about what exactly is so compelling about the virtual world and what he thinks about the idea of Minecraft in the classroom.

When Billy first introduced me to the game a couple of years back, I have to admit, I was underwhelmed. I really didn’t quite get why he (and so many of his peers) were enthralled in a game with very basic graphics and what appeared to be a pretty old-school interface when there were so many other alternatives. Turns out, Billy and his friends could care less what the game looks like so long as it’s fun.

So the real question is: what’s fun about Minecraft? When I posed this question to my son, he told me what he liked about the game most was how unstructured it is. There are some rules, but they’re loose rules, and they can be broken. In some “modes” (there are several), there is a way to “win,” but according to Billy, beating the Ender dragon isn’t that big of a deal. In fact, he prefers “Creative Mode” where he can build structures using Lego-like blocks and collaborate with friends on new projects.

There’s also a “Survival Mode” in which players have to mine for supplies to survive, but if you die, no biggie, you can be re-spawned.

After talking to Billy for a while about why he loved the game, I realized it came down to this: Minecraft is a game that allows kids to explore and discover freely without a whole lot of rules or the pressure of fabricated competition. Billy says he finds it relaxing and enjoys getting in the Minecraft “zone” after a long day of school with—you guessed it—lots of rules and fabricated competition.

Creating/Surviving a World of Their Own

As I mentioned, there are several different “modes” on Minecraft, but the two most basic are “Creative Mode” and “Survival Mode.” In Creative Mode,” players have every available resource at their fingertips including all assortment of wood, stones, decorations, and even potions. By combining these resources, they can create an infinite number of tools, houses, and contraptions. They’re even able to experiment with “Redstone,” which is basically electricity in the Minecraft world. 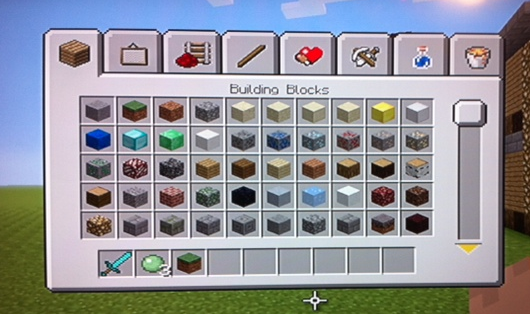 In Survival mode, there’s a bit more pressure. The player is introduced into a randomized world of forests, deserts, oceans, and other landscapes. They have no supplies and must watch the dashboard carefully to monitor their health and hunger in order to avoid imminent death. Each “day” lasts ten minutes, and monsters such as creepers, zombies, and skeletons come out at night to attack. Nothing is easy in Survival Mode, monster attacks included. Instead, staying alive requires that the player explore, discover, and problem solve. For instance, in order to build a pickaxe to mine more efficiently, the player must first punch down trees to harvest wood, mine for ore, build a craft table, and build the tool themselves. To eat, one must not only hunt for meat (the primary food source in the game), but they must also build a furnace and add fuel for cooking. As I watched Billy demonstrate these basic tasks, I asked him how he knew to do these things (e.g., build a craft table or make a furnace) as there are no clear instructions for game play. He told me that many of these tricks can be discovered through good old-fashioned trial and error, but if that doesn’t work, players can turn to the Minecraft Wiki or various YouTube channels for answers.

When I asked Billy to show me the most impressive thing he’s built on Minecraft, he was a bit apprehensive. Though he’s been playing the game for a couple of years, he admitted that to create some of the amazing structures you see online, you have to have a lot of talent as well as quite a bit of time on your hands. Nonetheless, I was pretty impressed with the town he and a few friends created together. It’s complete with a farm, treehouse, and playground.

Are There Any Dangers?

Although Minecraft has deservedly gained a reputation for being one of the more educational games available to kids, it’s not without its dangers. Kids will be kids after all, and some use the platform to build things that parents may find graphic or inappropriate. For instance, Billy admitted that many public servers are rife with “penis statues” and other potentially disturbing images. Not surprising considering the number of tween boys on the platform, but if you’re uncomfortable with your kid being exposed to what could be considered lewd graphics, then you’ll want to take precautions.

Other players become what the Minecraft community has dubbed “griefers” who go around tearing down other players’ creations. Billy found out the hard way that the Minecraft community takes griefing very seriously. What he thought was innocent playing around one afternoon after school actually got him booted from a friend’s server, and much drama ensued. After a peer-induced probationary period, Billy was allowed back on the server, but only after he vowed to never “grief” again.

There is also a chat feature on Minecraft that allows players to interact with one another. This, of course, brings into play all of the risks of any other social network such as cyberbullying and online predators, not to mention exposure to profanity. To avoid these risks, Billy plays on a friend’s private server (yes, you can create your own for a small monthly fee) with a few other kids. Most of them are family friends, but the group includes a few trusted friends from school as well. We’re also careful about which YouTube channels Billy watches for inspiration as many of these players are adults and use adult language. Through trial-and-error, we’ve found a couple of YouTubers like Ethos Lab who avoid profanity for the sake of their younger audience.

Our biggest issue, though, has been the amount of time Billy spends on Minecraft each day. As creative as it is, I want to ensure that he’s not missing out on other important activities such as outdoor play and real, face-to-face interaction with peers. When he first discovered Minecraft, it was a struggle to lure him out of the virtual world he created on the platform and back into the reality of chores, homework, and family time. When I discovered he was staying up past his bedtime to log on to the server, I knew we had to rein it in. Now, we allow 30 minutes to an hour on weekdays, depending on homework and extracurriculars, and two hours per day on the weekends. Communicating what these limits are has been helpful and eliminated a lot of frustration for the both of us. If Billy knows going into his session that he has 30 minutes left as opposed to an hour, then he can plan his gameplay around these time restrictions as opposed to being forced to stop in the middle of building a complex structure.

Will Kids Embrace Minecraft in The Classroom?

As a former high school teacher, I can see many cross-curricular applications for Minecraft in the classroom, but honestly, I wondered if it would ruin the game for kids. After all, the quickest way to strip the appeal for tweens and teens is to turn the game into a class assignment, right? Not necessarily. When I asked Billy what he would think if his teacher gave him a Minecraft “assignment,” he grinned brightly and said, “Bring it on!”

From the perspective of both a parent and a teacher, I feel confident recommending Minecraft as part of your child’s screen time allotment. Although there are risks (as with any online platform), I’ve been able to manage them with a few simple tweaks and a lot of ongoing conversation with Billy about just exactly what’s going on in his virtual world.

Do your kids play Minecraft? Are their teachers using it in the classroom?