Probably not, but family psychologist Maria Guerrero argues it may be harming them in other ways. 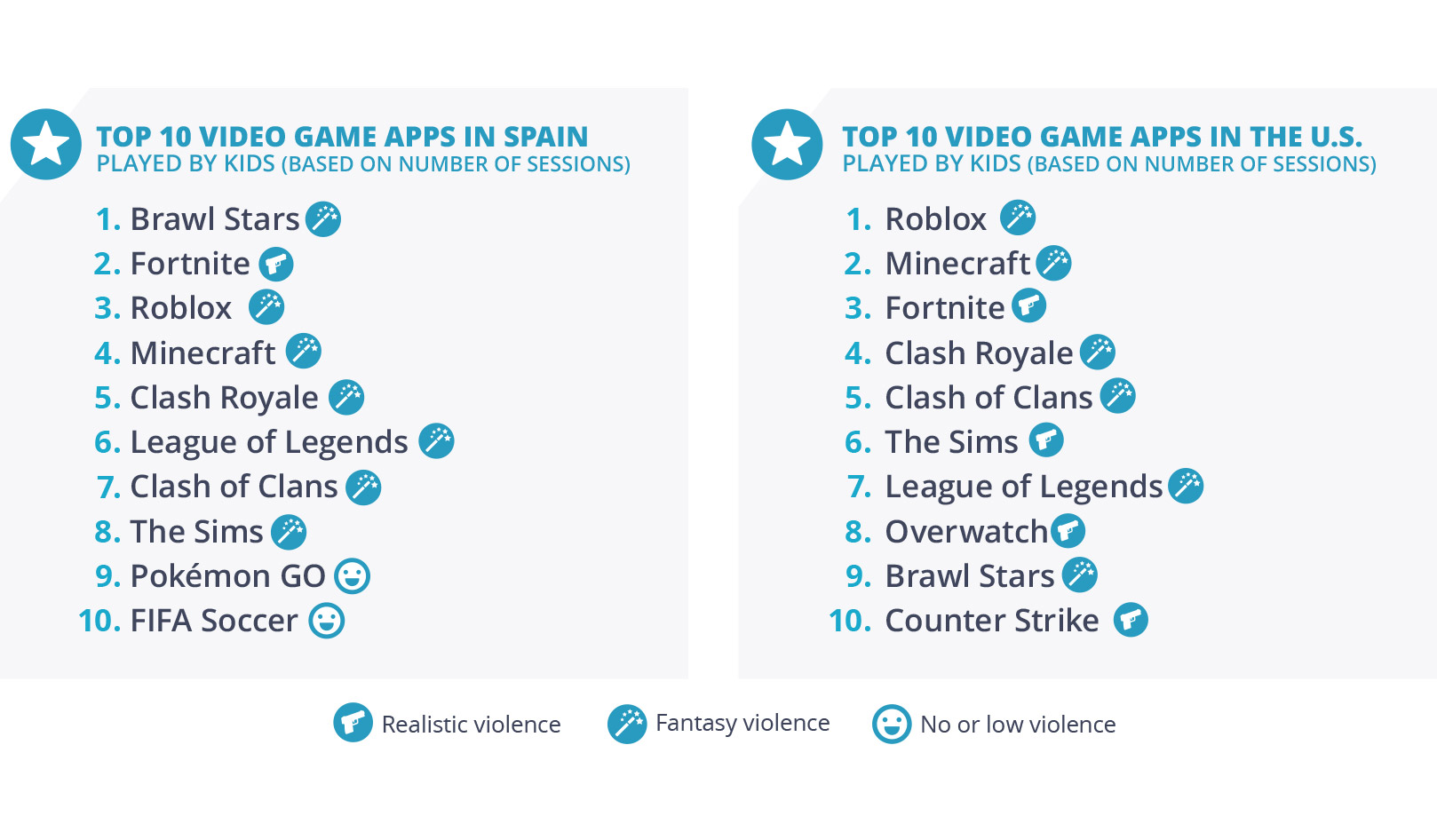 Kids have been playing video games since Atari introduced Pong to the masses in 1972. As gaming has evolved, it is safe to say it has also become more violent, addictive, and lucrative. In terms of money, I am not talking about the prize money you see on the news, like 16-year-old Kyle Giersdorf taking home $3 million after winning the Fortnite World Cup Final. I am talking about the gaming industry itself which is expected to reach $189.1 billion in revenue by 2021 and has been bigger than Hollywood for well over a decade.

But it’s the upward trend in violence that most interests and concerns me, as a psychologist, and the parents that I meet. As video games become more advanced and more realistic, so too does the violence. Even seemingly innocent games like The Sims, a suburban life simulation game, now have extreme violence mods (modifications of games, usually made by fans).

A 2019 sample by Qustodio of kids’ activities in the gaming category in the U.S. and Spain (see infographic above) clearly shows that all of the top games played by kids contain some kind of violence, whether realistic or fantasy.

What does all this exposure mean for kids and their development? The verdict is still out. Many studies, including those supported by the American Psychological Association, find violence in gaming leads to increases in aggression, but others identify no such link. At first glance, it seems logical that more exposure to violence would lead to more violent behavior. But, given the massive exposure to violent games kids have, wouldn’t kids today, after years of violent game play, be far more violent? Yet, they are not.

I agree with the results of a study in the Proceeding of the National Academy of Sciences that says exposure to video game violence leads to a small increase in aggressive behavior. And, that only when combined with other negative life factors, like violence or guns in the home, does video game violence become a contributing factor to turning to violence in the real world. It reflects what I have seen in my own practice and doesn’t use video games as a scapegoat for all of society’s ills.

I don’t believe in banning video games or blaming them for mass shootings, but I do think even a small increase in negative behavior or creating a casualness with guns is enough reason to at least limit violent game play. Violent games, like nearly all games today, are also designed to be addictive, and here is where the evidence is increasingly clear – extended exposure to excessive screen time is harmful to children’s psychological, emotional, and physical health.

So, no, your child is probably not going to be permanently harmed by playing violent video games once in a while (I recommend keeping screen exposure, of any kind, to a maximum of 1 hour a day). But it’s probably not doing them all that good either. In fact, I hear kids complaining of the peer pressure to play, fear of being left out, and humiliation for making mistakes or not having the latest gear. There are just so many other ways they could be spending their time, including just being bored!

And remember, endorsing extended exposure to violence is also a reflection of your values as a parent. If you want your child to learn that violence is not something you or your family agrees with, being selective in the video games you choose, just like with the Hollywood movies you watch, is a good place to start.