This page is chapter 3 in a five-chapter series of app categories included in our report Living and learning in a digital world on children’s digital habits during the year 2021.

What we found for gaming apps 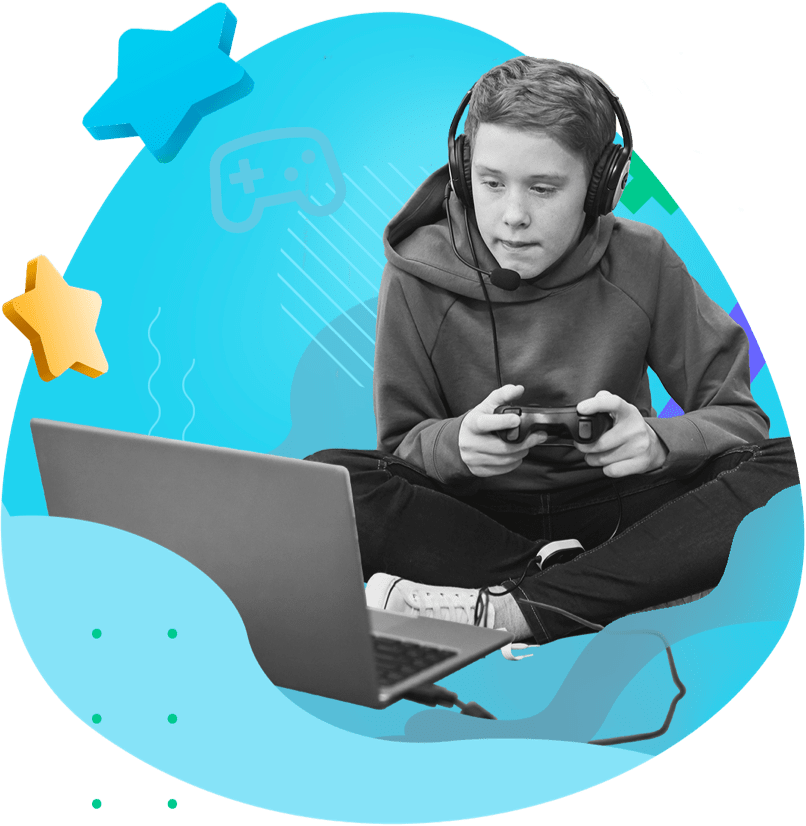 What we found for gaming apps

The time kids invested in their favorite games held firm in 2021, with their newly acquired pandemic screen time habits proving difficult to shake. On a global level, and in the US and UK, children matched their 2020 gaming time minute for minute. In Spain, where limiting video game time was the most popular supervision strategy in our family survey, children managed to bring their video game screen time down by 15%.

While game-time stabilized, kids invested extra minutes in online strategy and first-person shooter style games, such as Defense of the Ancients 2, Destiny 2, and Fortnite, along with classic favorite World of Warcraft, increasing their time on these games by an average of 18%.

In terms of time spent, World of Warcraft took the crown in the US, with kids spending 185 minutes, or just over 3 hours daily, absorbed in the fantasy universe. In all other countries analyzed, Roblox was the clear frontrunner. Despite Roblox’s longest ever downtime in October of 2021, where the game was offline for 73 hours, children still managed to increase their time on Roblox by 80% during 2021, spending 173 minutes a day on the hit platform.

THE MOST POPULAR GAMING APPS IN 2021

In all countries analyzed, Roblox was the most popular game, with 56% of kids playing it around the world, rising to 62% of children in the UK, and 61% in the US. For the first time in our analysis of children’s app habits, Roblox took the top spot in Spain, with 38% of children diving into the 3D experience.

Long-term favorite Minecraft took the global silver medal for gaming (26% of kids), holding firm in its position in the US and UK along with a slight increase in popularity. While Minecraft failed to make 2021’s top 5 in Spain, it came in sixth position for the first time at 13%, showing growth in popularity in the region.

Globally, Among Us and Clash Royale also gained popularity in 2021, increasing by 7% and 8% respectively. Conversely, party-style this or that game What Would You Choose? Rather lost popularity points, falling to fifth position overall globally, from third to fourth in the US, and from second to third in the UK. In Spain, where children have never featured What Would You Choose? Rather in their top 5, Brawl Stars was the game of choice, with 33% of kids teaming up with friends in the online battle arena game. 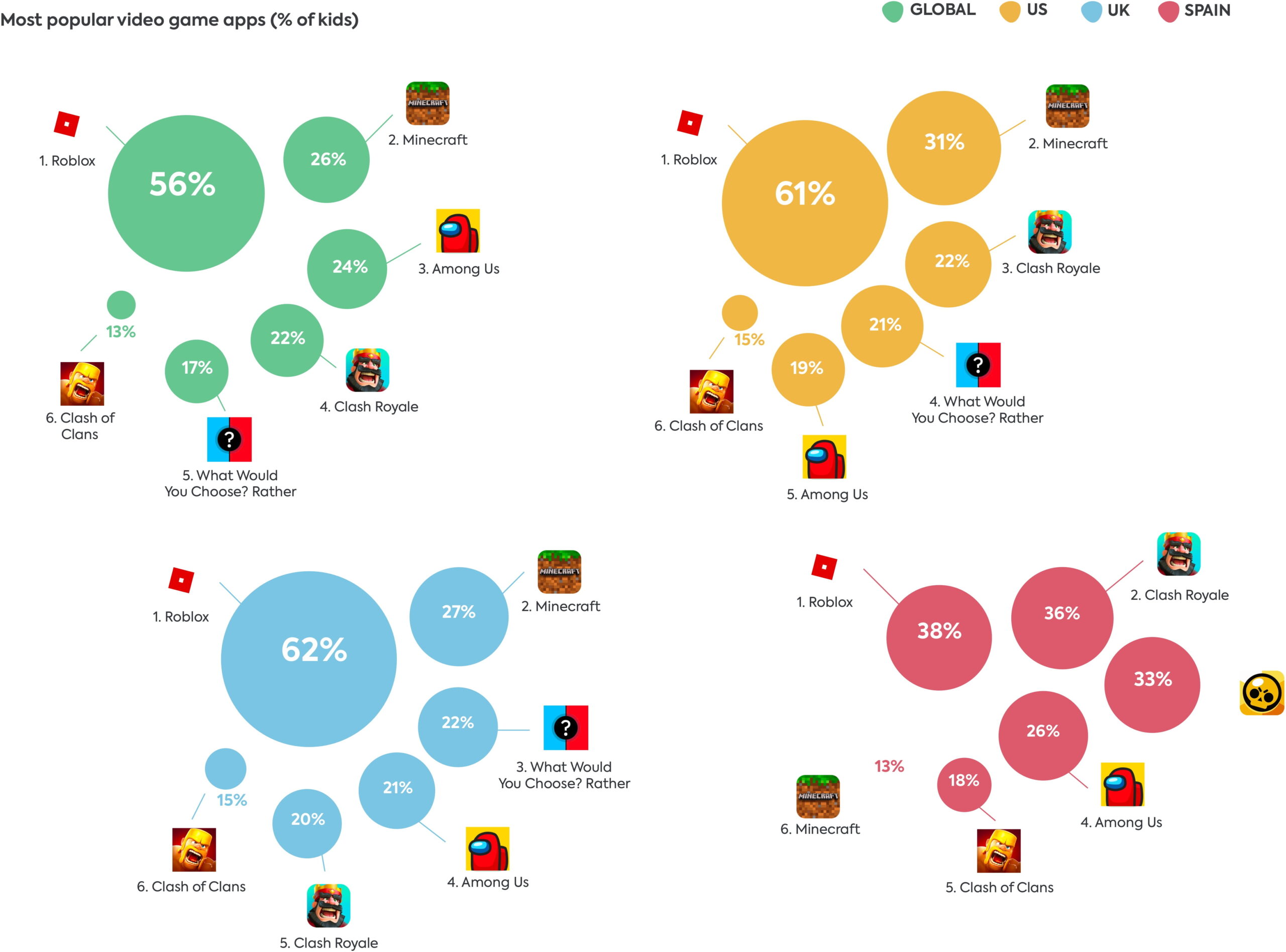 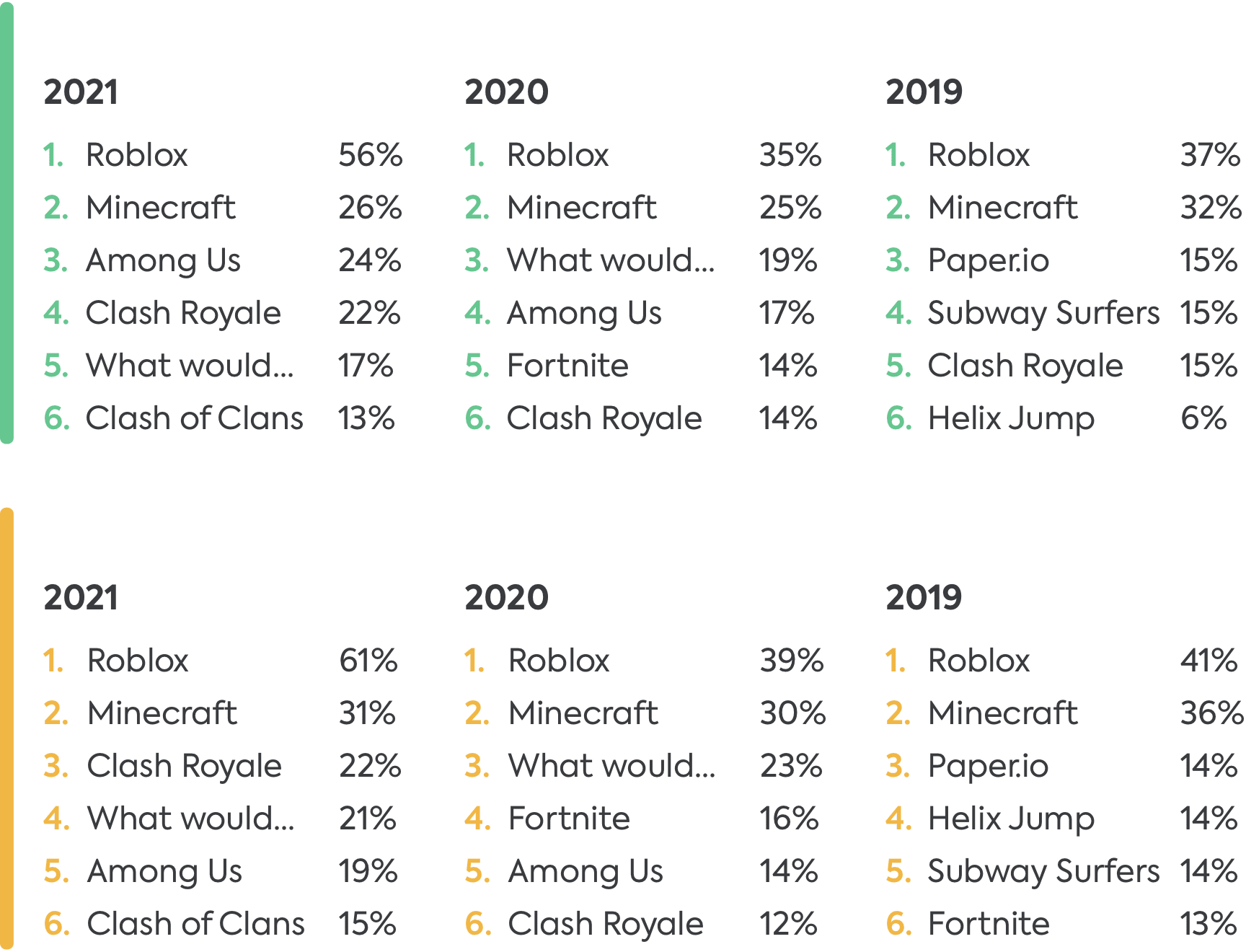 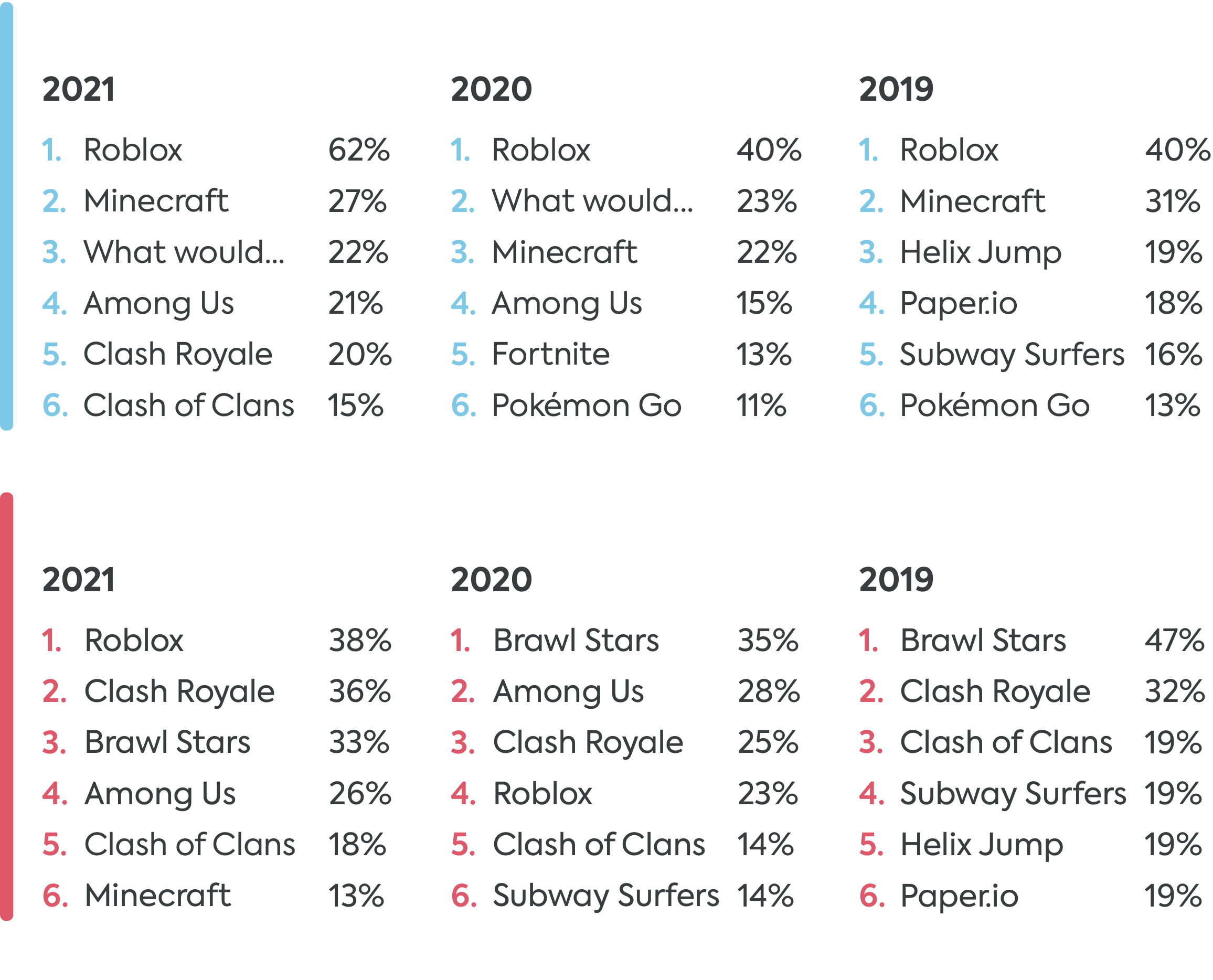 HOW MUCH TIME DID CHILDREN SPEND ON VIDEO GAMES IN 2021?

Globally, kids of all ages spent the most time playing Roblox for the first time in our research since 2019, on average using the game for 173 minutes a day – almost 3 hours – across 2021. The only game to beat this time record was World of Warcraft, where kids worldwide spent 185 mins/day, despite it not making even the top 10 in terms of popularity.

Time on the third most popular video game, Among Us, also increased in 2021, rising to just over an hour in the US and UK (61 mins/day). Children in Spain spent less time overall on nearly all of the country’s most popular games, reducing their time on Among Us by 8 mins/day, and long-term favorite Brawl Stars by 10 mins/day.

While time on Roblox and Among Us largely boomed, number two most popular favorite Minecraft lost out on multiple minutes of gameplay worldwide. Despite its global community of players rising to over 141 million in 2021, children played Minecraft 14 mins/day less than they did in 2020, falling from 49 mins/day to 35 mins/day.

Time spent on video games remained relatively stable year-round in all countries except the UK, with kids spending an average of 38 mins/day on all types of game. A bigger dip could be seen in October and November, most likely due to parents restricting time on video games in countries where September back-to-school routines came into force.

Kids in all of the countries analyzed, where remote learning was still an option for many schools in the early months of 2021, spent more time on video games at the beginning of the year – especially in the UK, where game time peaked at 47 mins/day in February. Children in the US spent the most time on video games, averaging 40 mins/day, while Spanish children spent 43% less time connected than their US counterparts, at just 28 mins/day overall.

With my sister I like playing interesting fun games where you've got storylines and you can build things, for example Minecraft where you can join other players, build with them, help them survive.
- Girl, 10, UK 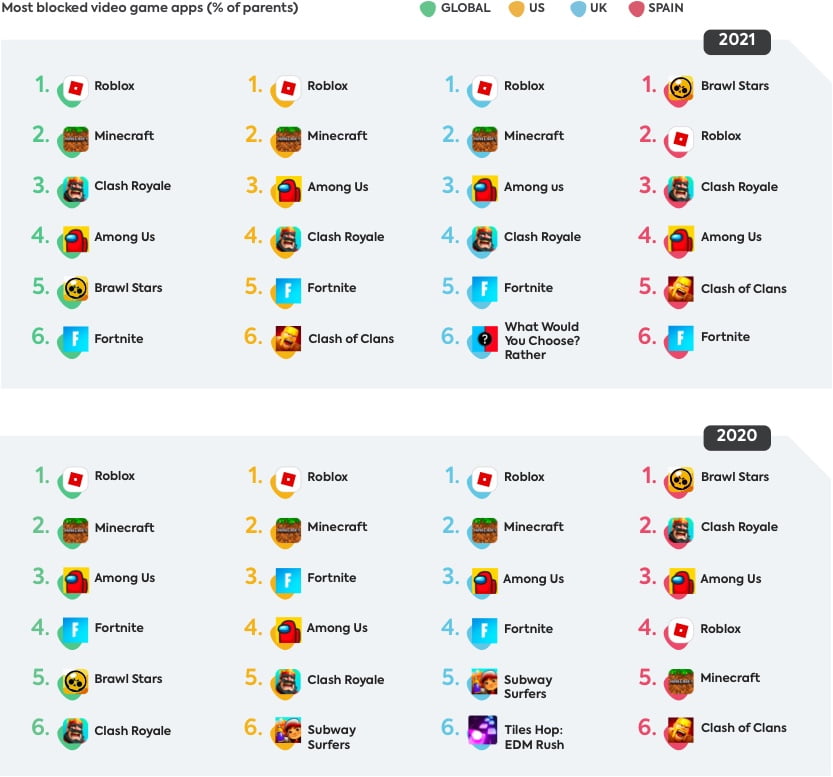 THE MOST BLOCKED GAMING APPS IN 2021

Following in the footsteps of the children’s most popular list, globally, Roblox remained the number one blocked app for the second year in a row – and third in the US and UK.

For the third year in a row, Brawl Stars held its position as Spain’s number one blocked app, despite children there increasing their time on Roblox by 69% across the year, while reducing their time on Brawl Stars by 25%. Battle-Royale style shooter Fortnite, which fell from the kids popularity charts on a universal level, still featured in the block list, coming in sixth position overall, and fifth in the US and UK.

THE MOST BLOCKED GAMING APPS IN 2021

Following in the footsteps of the children’s most popular list, globally, Roblox remained the number one blocked app for the second year in a row – and third in the US and UK.

For the third year in a row, Brawl Stars held its position as Spain’s number one blocked app, despite children there increasing their time on Roblox by 69% across the year, while reducing their time on Brawl Stars by 25%. Battle-Royale style shooter Fortnite, which fell from the kids popularity charts on a universal level, still featured in the block list, coming in sixth position overall, and fifth in the US and UK.

Whenever I spend too much time my parents tell me to stop, at that time I feel bad. Then I understand that my eyes are more important than my game and I should do something else.
- Boy, 10, US

What we expect for gaming apps

Unlike time spent across the other categories we analyzed, the minutes children devoted to playing video games showed little change. We expect the higher numbers experienced in 2020 and 2021 to peak, with global trends following Spain’s downward turn in the future, likely as a direct result of concerns over how long children are spending in front of screens.

Of the 87% of parents who reported they supervised their child’s use of technology, the number one most popular method was through limiting the amount of time they spent playing video games (at 54%). We expect this method of supervision to remain the most popular for families, meaning that while time devoted to games that increase in popularity will rise, overall game time for children will stabilize for a number of years, rather than returning to the highs experienced during 2020.

As increasing amounts of money are speculated to be spent on in-game purchases, with market value projections of up to 74.4 billion USD for 2025, we expect more value to be placed on “ownership” of items purchased online, as reflected in the louder conversation surrounding non-fungible tokens, or NFTs, in the second half of 2021 – unique sets of data associated with digital files, such as plots of land, or items purchased in a game.

Finally, gaming will slowly become more accessible to all, allowing online multiplayer games to increase in popularity, through cloud services which enable gamers to connect from anywhere in the world. Rather than needing a games console or gaming PC, kids will only need a fast internet connection to allow them to access games on a remote provider – opening the world of gaming up to millions more children worldwide.

Because we can’t go out so much now, I need distractions. I also learn things through games like Minecraft. I enjoy myself with friends, I feel emotions and things like that.
- Boy, 12, Spain 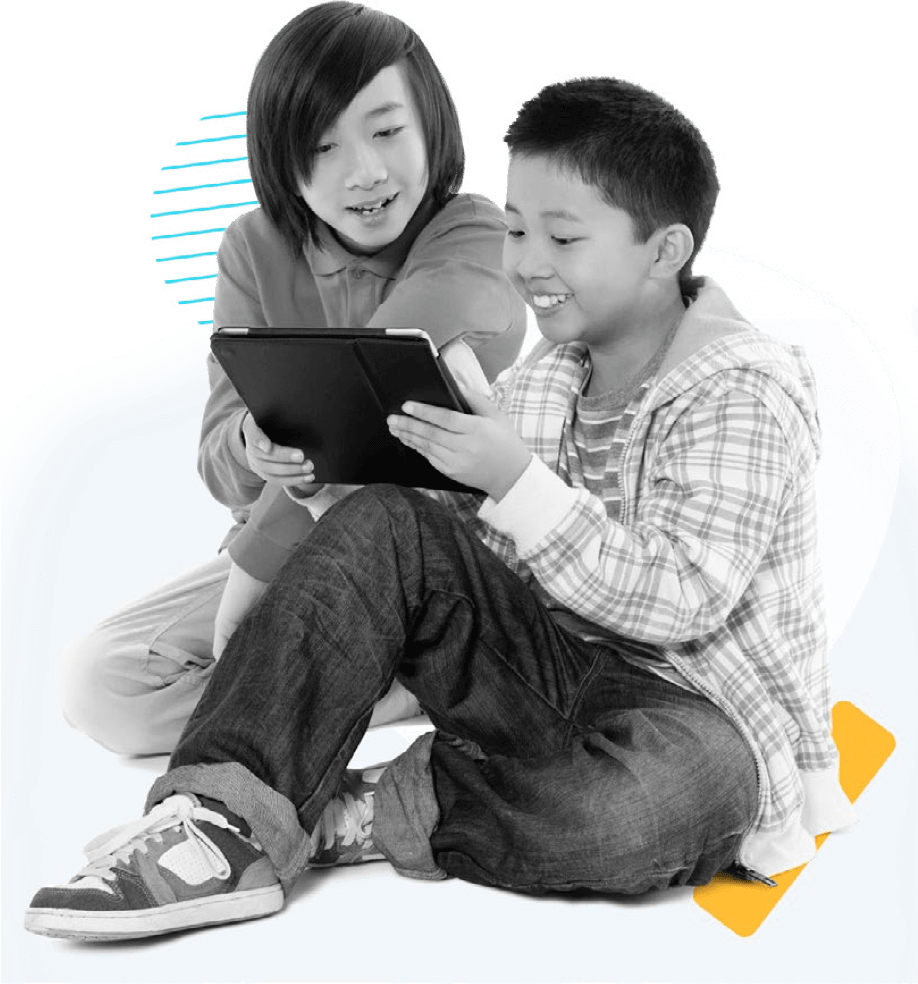 What we recommend for gaming apps

With any game, whether on or offline, the first step should always be getting to know it together as a family, allowing everyone to understand if they are comfortable with its content: aside from violence and inappropriate themes, there may also be heavy levels of in-game advertising or in-app purchases which affect children’s gaming experience.

Video games can be a great way for children to bond with friends and family members, and distract themselves from any real-world stresses they might have. Games can also be a way to help children learn and explore, building their own stories through code or creating their own individual worlds in life simulation games. To enjoy these positives, balance, along with an understanding of how children choose to spend their time gaming, is key. 30 minutes spent playing Minecraft with friends after school could be considered more beneficial or purposeful than 30 minutes spent hopping from game to game on a tablet.

There are lots of people who go on YouTube or on videogames to give "tips" that really are to trick children. There are a lot of bad people. And you reach a point where playing games so much is boring.
- Girl, 11, Spain

As parents understand the need to set limitations on video gaming, the next challenge will be to help them understand how to make more conscious choices surrounding the games they play. The wider risks of gaming, including in-app purchases and loot boxes, access to personal data and information, cyberbullies, and predators, should be part of the conversation from an early stage – always adapting to the child’s age and family situation.

With children spending long periods of time on online multiplayer games, where players can join from around the world, kids are exposed to new people and experiences, but not without risk. Many of the children we interviewed as part of our research spoke about the dangers of online gaming, including hackers, scammers, and predators. If children are considered old enough to engage in online games, they should also be able to understand some of the potentially risky scenarios they might face when playing with others online. Ultimately, any online game is safest when played only with real-world friends or family members.

I don't like the toxic environment in some gaming communities, which if you like games a lot you have to experience because you come into contact with those people. That's why I try to play with my own friends, and silence games when I play so I can't hear what they're saying.
- Boy, 12, Spain
<< Back to Social media apps
Back to the top
Read chapter 4 Educational apps >>

Summer sale ends soon! Use coupon code  SUMMER10 at checkout for 10% off Premium.