In what feels like a lifetime ago in the world of technology, a simple message sent to friends or family was limited to 160 characters, and cost roughly 11 cents. These limits heavily defined daily communication, encouraging mobile users across the globe to brush up on their editing skills, and get creative with language. Textspeak, now almost as ancient as hieroglyphics for Gen Z and Alpha, featuring short forms of words and even whole phrases, such as “gr8”, “2nite”, “CUL8R”, and “TYSM”, became commonplace in attempts to hold a meaningful conversation within those precious 160 characters.

Texting as a popular form of communication soon replaced phone calls, and in 2007, for the very first time in the USA – where more text messages are sent than anywhere else in the world – Americans sent and received more texts per month than they did phone calls.

Just two years later, WhatsApp arrived on the market: the free messaging service that would completely revolutionize how texts were sent and received. Mid-2021, WhatsApp became the most popular communication app worldwide, with insights from Statista showing 2 billion active monthly users on the app. According to Facebook’s Mark Zuckerberg, a total of 100 billion messages a day are sent using the app.

Due to WhatsApp’s enormous popularity, Qustodio, leader in online safety and digital wellbeing for families, has produced a report looking into how young people aged 10-18 used the app in 2021, focusing on WhatsApp use in Spain, The United Kingdom, The United States, and France.

The insights collected show that WhatsApp is the communication app of choice for young people in most of the countries analyzed – in Spain, WhatsApp sits comfortably in the number one position, with 52.74% of 10-18 year olds active on the app. While WhatsApp is still the number one communication app for children in the UK and France, the number of active profiles is lower, at 36.81% and 29.14% respectively. The United States lags far behind, representing a small percentage of children, with just 5.2% active on WhatsApp. 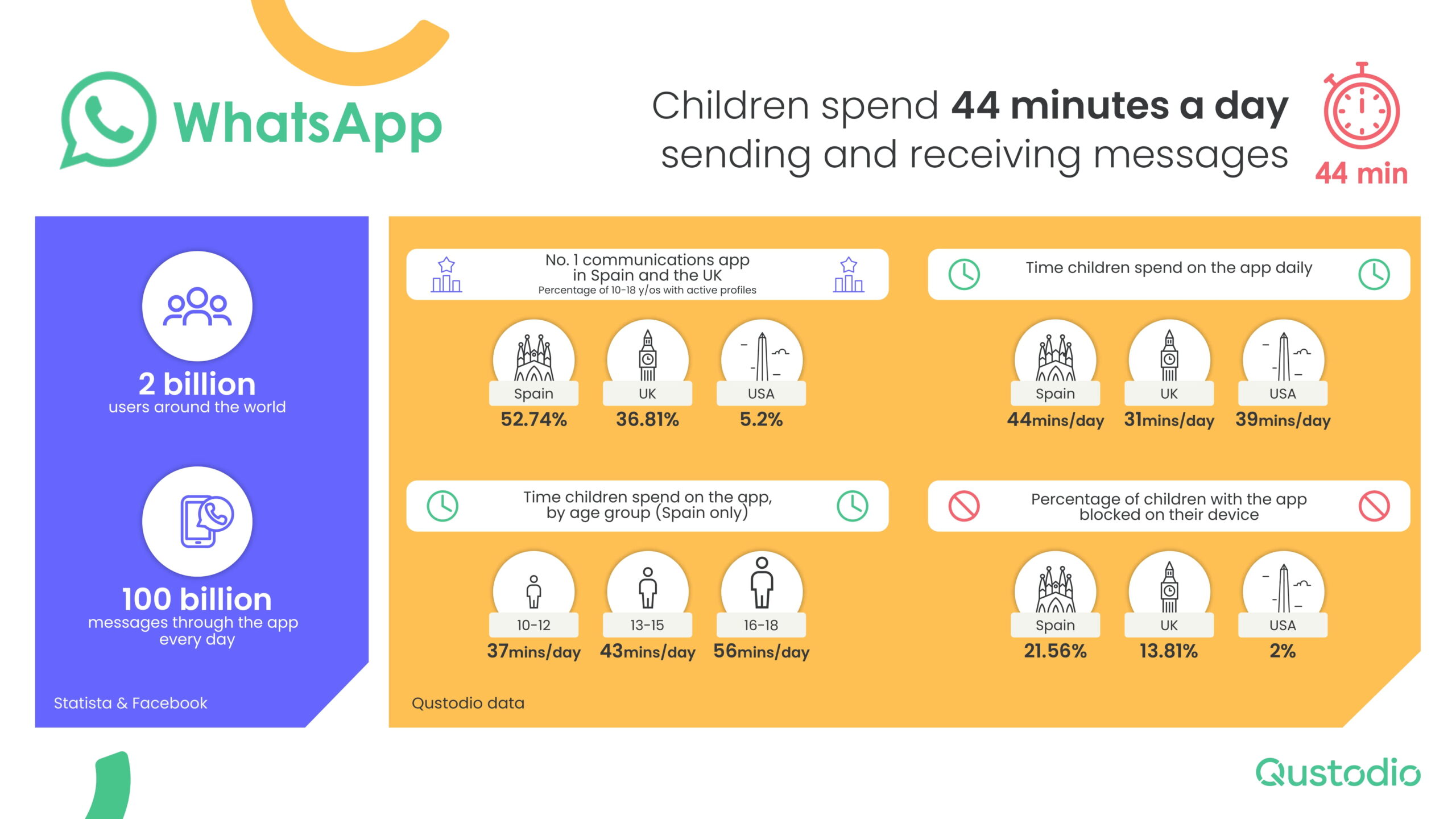 How long kids are spending on WhatsApp

Children around the world spend an average of 44 minutes on WhatsApp every day, with Spanish children matching this average as. Usage in Spain among 10-18 year olds in 2021 is up by 41.94% from 2020, translating to almost 268 hours every year sending and receiving messages through the app.

Looking into the time Spanish children of different ages spend on WhatsApp offers further insight into how younger kids and teenagers are communicating online: 16-18 year olds are the group spending most time on WhatsApp (56 minutes daily), followed by 13-15 year olds at 43 minutes per day, and finally, 10-12 year olds, who spend a total of 37 minutes a day writing and reading messages on WhatsApp.

WhatsApp is frequently blocked by parents

The instant messaging app is mainly a means of communication for its users, but this doesn’t mean that WhatsApp is exempt from risks. Photos, videos and audio messages with inappropriate content can all be sent using WhatsApp, and younger users can be subject to cyberbullying through the app. In addition, message sharing is easy through WhatsApp, meaning viral messages can be passed along quickly, which could easily be full of false information, or encourage dangerous activity, such as in viral challenges.

For these reasons, many families choose to block WhatsApp on their children’s phones. According to the Qustodio study, 21.65% of Spanish children have the app blocked on their phone, followed by 13.81% of kids in the United Kingdom, 12.68% of French children, and just 2% of children in the United States.